Uncharted's Time on Vita Shows Off How Well They Work Together

Quick Note: Uncharted: Golden Abyss is not perfect, but it is fun. As a complete and launch Vita title, it has all the bells and whistles and does not disappoint. For any Vita adventure fan, this is a must own.

With Vita needing a strong launch title, Uncharted meets the need with a strong, solid open to the Vita's life. It has everything that you would expect: Strong gun play, good platforming, an interesting story and treasure hunting.

Read more »
From The King of the Court Jesterhead at 10:49 PM No comments:

Quick Note: The game is just mediocre. Resistance is a franchise that built itself as a unique, atmospheric experience and crazy weaponry. This game is lacking in almost every aspect of this and shows itself as a generic, run in the mill shooter.

The Vita is the first hand held with two joy sticks and with that announcement shooter gamers rejoiced! Unfortunately, it looks to be a rocky climb to the top of the game mountain. As a game, it is feasible. However, it's just missing that spark that makes Resistance such an interesting franchise.

Read more »
From The King of the Court Jesterhead at 10:11 PM No comments:

Asura's Wrath is a Quick, Interesting Take on How Video Games Have Changed

Quick Note: Asura's Wrath is a hard game to place. It's a short ride, but it's one hell of a ride. Though you watch as much as you play and a majority of game play is Quick Time Events, it is enjoyable. It's definitely a niche game. 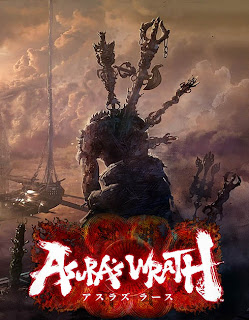 Most games are pretty easy to pick up for 15 minutes to an hour and determine whether or not you're going to like it. Asura's Wrath is not that game. It took the entire play through, from opening credits to ending credits, to determine just how much I could appreciate what this game was.

Read more »
From The King of the Court Jesterhead at 9:21 PM No comments:

Quick Note: Gravity Rush is everything the Vita has been waiting for. Take inFamous, swap the electric powers for gravity powers and add a more comic book styled world and you have a great game with the beginnings of an excellent franchise

Ever since I received my Vita, I have been so excited about this game, and let me tell you: it did not disappoint. With a large open world to explore, amazing gravity powers, and an intriguing narrative, Gravity Rush is the top triple-A title out for the Vita right now.

Read more »
From The King of the Court Jesterhead at 4:30 PM No comments:

Tales From Space Shines on Vita

Quick Note: This game is exactly what the Vita needs. It's got solid game play, great amount of content and is only $8. Every Vita owner needs to play this and every Vita developer needs to take notice of the fun to play cheap game.

With the release onto PSN at launch time, I expected to pass this title up for some other, blockbuster level titles. Fortunately, Drink Box Studios put much love into this little title; enough for it to shine amongst, and even above, the large triple A titles to become one of the top titles at Vita's launch.

Read more »
From The King of the Court Jesterhead at 3:48 PM No comments:

Journey Shows off the Emotional Power of the 2 Hour Game

Quick Note: Journey is a Masterpiece, just like FLoW and Flower. Not only does it have a great majesty about it, it also incorporates online co op in a unique way that brings the player back again and again.

thatgamecompany has always made wonderful and unique games, offering experiences that mirror art as well as gameplay, and Journey is no different. The game places the character as a wanderer of sorts, stuck in the middle of the desert with no instructions, no direction other than a light on top of the mountain in the distance. That's it for story, but the way it unfolds is astounding. With no dialog  what so ever through out the entire game, it's up to the player to understand and infer as he/she travels across the landscape and watches small, dialog-less in game movies.

Read more »
From The King of the Court Jesterhead at 2:53 PM No comments:

Quick Note: Portal 2 is amazing. The single player campaign is the right style of challenge and hilarity that will make you want to play again and again. The co op campaign adds an extra layer of awesomness to the game and is highly recommended.

Portal was such a unique game. With smart puzzles, a unique gameplay mechanic and a villain who controls everything around you, it was an interesting experiment that led to a cult hit. With the release of it's sequel, everything has been taken to eleven and it's astounding. Read more »
From The King of the Court Jesterhead at 1:43 PM No comments:

inFamous Dresses Up for Halloween and Wins the Costume Contest

Quick Note: This is inFamous lite. It's a quick romp through the world of inFamous 2, showing off Cole and his abilities while making a quick story. Every aspect that makes inFamous great is available, and with trophy hunting the game will take between 2 and 6 hours to play and is only $10.

As technology gets cheaper, it becomes increasingly easier to utilize it to reach a larger audience. This is why cell phones are becoming the most popular medium for game designers, even slowly pulling in large studios like Epic. The three major console companies are starting to get wise to the act and are starting to introduce their own brand of quick to play, short to last and enjoyable download games. With this movement, Sucker Punch has decided to throw it's fighter into the ring and introduces inFamous: Festival of Blood, a quick stand alone game based in the inFamous universe. 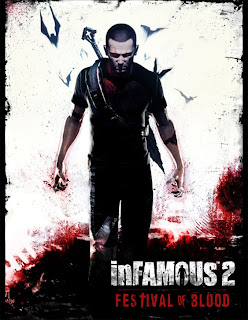 Read more »
From The King of the Court Jesterhead at 8:52 PM No comments:

God of War Collection is Great, Albeit some Old School Annoyances

Quick Note: If you haven't played God of War 1 or 2, I highly recommend picking up the collection. It's now $20 - $30 for one old school game that is slightly frustrating and one great game that leads up to God of War 3.

When God of War released it's first demo, I played it for all of five minutes. Maybe it was just my gaming skills at the time or maybe my patience, but I got so frustrated that I quit and vowed I would never play the series out of spite. So God of War released to acclaimed reviews and I passed it up. God of War 2 followed, but again I passed it up. After years I broke down and played God of War 3 (my review here) I have finally come to my senses to play the first two.

Read more »
From The King of the Court Jesterhead at 8:25 PM No comments: Quick Note: If you are expecting 'Hybrid Theory' or 'Meteora', you will be disappointed. If you take the band as a whole, through their beginning til now, you get Living Things.

After the drastic (and amazing) changes brought on by the bands last record, 'A Thousand Suns', Linkin Park blends together everything they have to make the newest album, 'Living Things'.

According to Chester and Mike, after the last album there was a lot of ideas still floating around and unused. So with a lot to work with, the band got to work right away with they new music, and it's amazing what has come out.

Read more »
From The King of the Court Jesterhead at 5:27 PM No comments:

Take a Look Back